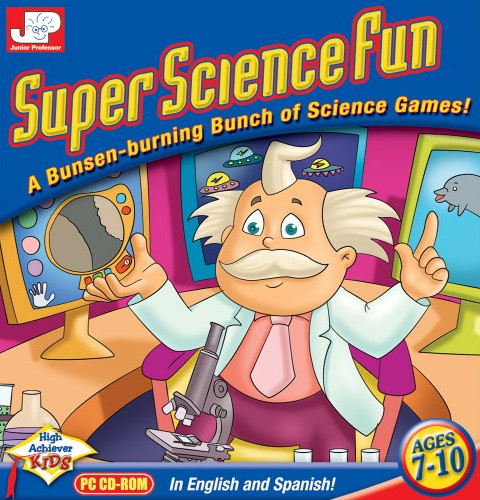 Ed: We Love retro and nostalgia here at Rodent Towers; which is handy as every now and then we are able to bring you what some what call a "lost" article. Others would call it a case of casual discrimination, or even neglect at the hands of the Editor. Most call it a "lost article".
Anyway, the beauty of loving nostalgia and retro shit means we are able to publish this a few years late and nobody cares. In fact it may have matured in the cask so to speak. Whatever you feel (lost article), here it is!

A treatise on the relative gaming merits of Skyrim and Dark Souls as evidenced through discussion on The Way Of The Rodent forum - Prof. P. Nutt, University of Rodentia, UK.

Abstract
The end of 2011 saw the release of two massive fantasy role-playing games -- Skyrim [Bethesda, 2011] and Dark Souls [Namco-Bandai et al., 2011]. Is it possible to quantify which is the superior gaming experience? The sales and awards figures suggest Bethesda won hands down, despite its vastly inferior box art [Morgan, personnal communication, 2010]. But does that tell the whole story? Let’s approach this scientamatifically. Pass me my lab coat, Deidra*, I’m going in.

Methodology
This experiment requires approximately 20 lab rats to bash away at a computer keyboard for 6 months. The Rodent forums have amassed some 60,000 words of discussion about Dark Souls. It’s generally well written prose, offering tips and tactics, the merits of different strategies, etc. The Skyrim thread, on the other hand, is a mere 9,000 words, mainly concerned with missing graphical textures for cows [Peter Van Buren, 2011]. These numbers are high enough to perform some statistically significant analysis. I mean, just look at the size of these green bars: 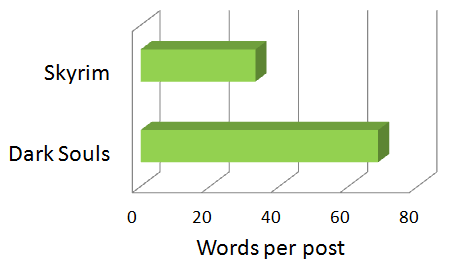 Results
The depth of discussion can be crudely estimated from the average length of an individual forum post: 67 words forDark Souls, 33 for Skyrim, as shown above. I can’t verify what fraction of those Skyrim posts are cut’npaste from elsewhere or are simply statements of having recently viewed a mudcrab. The diagram below gives a breakdown of the occurrence of certain key words.** These data have been normalised by the total word count. 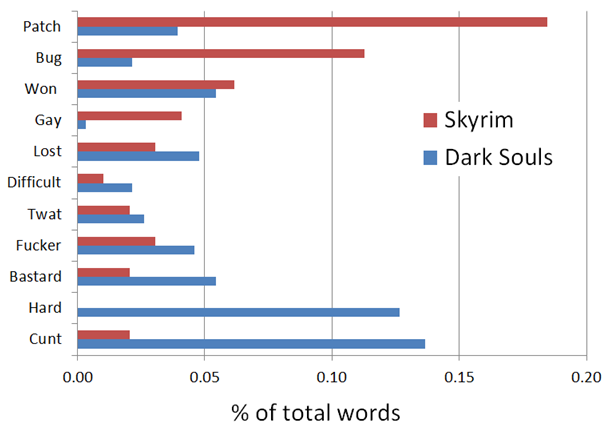 Appendix A: Personal experience
Based on its difficulty and its stoic refusal to hold the gamer’s hand, Dark Souls been widely touted as a return to old-school gaming. But much of the game design is incredibly progressive. Every aspect of the Dark Souls world has been hand crafted. Exploration is genuinely rewarding: I always wanted to know what was round the next corner and was rarely disappointed. I was excited about the contents of every chest, precisely because almost every item mattered in some way. By combining experience points and currency into a single number, i.e., souls, the game’s economy is incredibly robust. Add to mix the novel save mechanism and the fact that souls are lost when you die, and you’ve got a wicked new slant on risk/reward. It works. It makes you swear. But just as much, it makes you care.

Compare that with Skyrim. Sure, it's bigger, but some interiors are clearly cut’n’paste. By the time I’d entered my tenth cave system, I rushed through because I’d basically seen it all before. By the twentieth, I’d completely ceased exploration for its own sake. And while I appreciate the designers’ dedication to filling the world with wardrobes and bed-side tables, I wish they’d given the player a reason to open any of them. I stopped looking at loot beyond a cursory glance at its value - if you’re willing to schlep equipment back and forth to merchants, money will soon become entirely meaningless.

Realism in gaming is overrated for two reasons: When it works, it’s normally an inconvenience. But it’s also jarring when you are reminded of the limitations of a gaming world. Sure, it’s realistic that you can’t carry three different suits of armour and still race around at full pelt. So why then can I essentially become invisible by kneeling down in full view of the very guards who are searching for me?

And let’s not forget grinding. Both Dark Souls and Skyrim allow players to level up in order to deal with increasingly tough opposition. But the difference is that for Dark Souls, the real development primarily occurs to the sack of meat holding the controller, rather than the digits describing the character on screen. In fact, some masochists have gone as far as to finish the game without any levelling up whatsoever; all that’s necessary is skill and some knowledge of the game mechanics and world [R. Fiend, 2012]. That’s simply not possible with Skyrim.

Skyrim’s not a bad game. In fact, it’s a jolly good game. But Dark Souls is really something special. The power of science compels you to play it.